“The time for the EU is NOW” 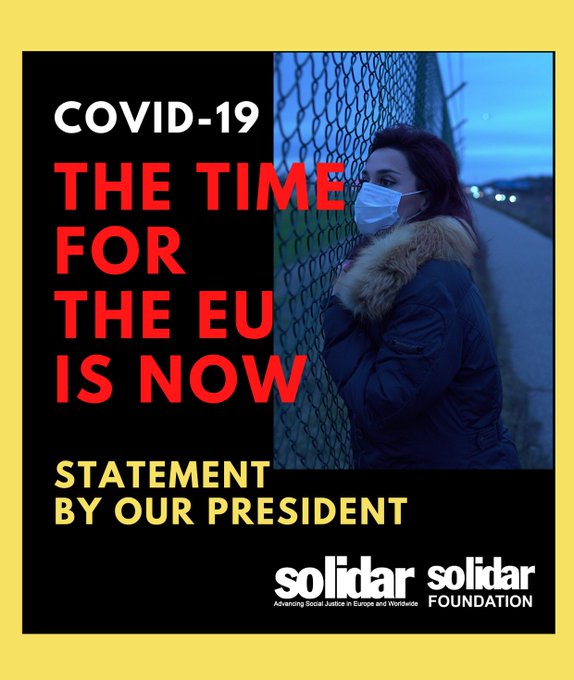 “World peace cannot be safeguarded without the making of creative efforts proportionate to the dangers which threaten it.” These are the words of Robert Schuman in his statement of 9th May 1950. Now, 70 years later, in full emergency of the COVID-19 pandemic they resonate stronger than ever. It is time for the European Union to demonstrate it again.

In these difficult times for Europe and for the world, immersed in isolation with nearly 40,000 fatalities, from SOLIDAR and SOLIDAR Foundation we want to transmit our solidarity with all who are suffering from COVID-19 and the loved ones of the deceased, who with great pain can’t give them one last goodbye.

We want to highlight the immense efforts of healthcare personnel, who are giving their all in overcrowded hospitals with limited means. And we want to remind about the urgent need to protect vulnerable people: elderly, migrants, refugees, women victims of gender-based violence, those experiencing homelessness and unemployment and many more. They all give meaning to the work we do, and therefore from SOLIDAR and SOLIDAR Foundation we demand they get the resources that they need.

As the European Union faces the worst health, economic and social crisis since its foundation, the Union as a whole must act urgently to give a joint response, in accordance with a global emergency never seen before in modern times. The time is now, it can’t wait anymore. The EU needs to provide sense of its own existence as a common project based on solidarity and respond with generosity, putting people at the centre of politics. There are no differences between North and South, East and West: all we are victims of this very serious crisis.

In a European Union that has not yet fully recovered from the 2008 crisis’ devastating effects for its citizens, the social and political fracture the COVID-19 crisis can cause could mark the end of the European project as we know it – unless all necessary measures are taken to safeguard Social Europe and the Welfare State. The EU must guarantee the economic support needed to protect citizens, and the Member States should demand this. “People first” must be the only mantra of every decision and policy carried out during and after the crisis. It is people who make up each Member State, which make up the European Union, and a Social Europe must be social with more force now than ever. If not, the reputational and confidence crises for the EU may be irreversible.

It is time to leave no one behind. The social protection of all citizens, and especially of those battered directly because of this crisis, must be the priority during and after the emergency. We also find ourselves in the paradox that the system is depending on those professions abused by the system itself, relegated to extreme wages and conditions of precariousness.

It is time to guarantee human dignity and human rights, founding values of the Union, for all citizens without exceptions. What will happen with refugee camps in the EU and abroad? What about the assistance to migrants in irregular situations? And victims of trafficking? What happens with people who were already in a situation of social exclusion? This crisis will strike twice as hard on all those people in a situation of social vulnerability.

We need responsible governance that urgently applies the principle of solidarity of the EU, the one that gives meaning to the European project. Saving lives and societies is the maximum priority. Rethinking the EU “to come afterwards” starts right now: it will depend on the common response to this current emergency. Cooperation, multilateralism and global governance are and should be the only pathways.